In the wake of truly exceptional summer warmth and dryness in southern Alaska, and increasingly unusual ocean warmth farther south near the west coasts of Canada and the lower 48, there has been something of a revival of interest in North Pacific temperatures and specifically the so-called “Blob” pattern of ocean warmth that first made headlines back in 2014.  It’s therefore worth taking a look at some of the recent data to see how current conditions compare to the earlier iteration of the phenomenon.  But first, here are a couple of recent articles that highlight the return to unusual warmth:

There certainly has been a resurgence of unusually high North Pacific surface temperatures in the past year or so, although I noted last November that the initial build-up in summer and autumn of 2018 was more pronounced in the northwestern North Pacific than in the northeast (and this was especially true in the subsurface waters).  Last winter some of the excess warmth was lost from the North Pacific ocean surface in response to seasonal weather patterns, but the warm pool returned quickly in May, and the last few months have been very warm once again.  Here’s a chart of monthly temperature anomaly (departure from 1981-2010 normal) averaged over the North Pacific north of 40°N.

Each of the major spikes of unusual warmth in recent years has occurred in summer or early autumn, and this by itself is an interesting aspect of the recent climate; it’s as if there is now a stronger warming trend in summer than in winter across the North Pacific, but I’m not aware of any proposed explanations for this behavior.

The latest month’s surface analysis (see below) shows that the focus has clearly shifted back to the northeastern North Pacific with the latest round of warming, and hence the renewed interest in the Blob pattern. 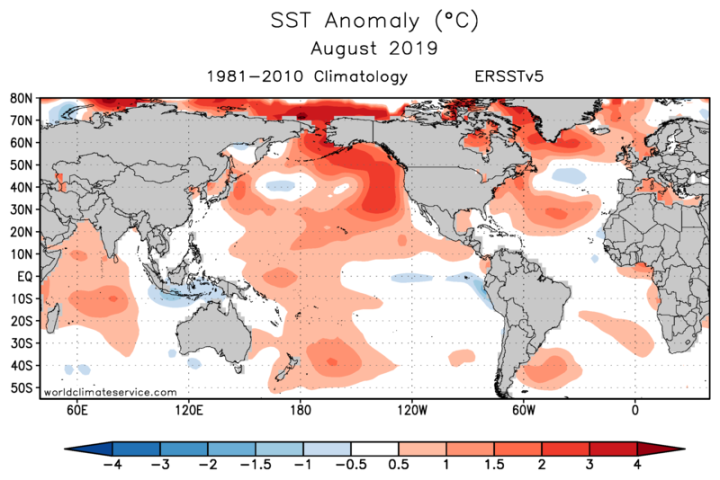 The chart below provides an update on the North Pacific Mode (NPM) index, which mainly captures SST variability to the south of Alaska between 40 and 50°N.  The double peak of the last year is obvious, and while the NPM phase has been strongly positive at times, the index hasn’t yet exceeded the peak values from the earlier Blob years.

If we look below the surface at temperatures in the top 100m of the ocean, it’s interesting to see a relatively subdued anomaly for the most recent month.  Compared to subsurface conditions from October 2018 (see the two figures below), there is less anomalous warmth across the North Pacific, and even to the south of Alaska the peak anomalies are smaller.  (But a word of caution may be in order here: NCEP’s GODAS relies on a limited number of subsurface ocean observations, and inevitably there will be uncertainties and errors in the analysis.  It’s only a model.) 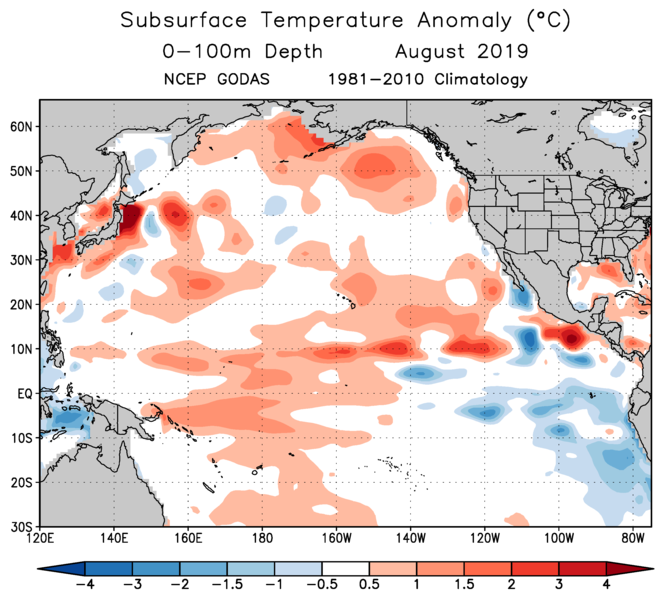 Here’s a time series chart of the 0-100m GODAS subsurface temperatures north of 40°N.  Last November I noted the spike up to record high levels as the northwestern Pacific warmed so dramatically; that extreme anomaly was short-lived, but nevertheless the volume-average temperature has remained significantly elevated compared to the climate of earlier years and decades prior to 2013.

Finally, a depth-longitude cross-section along 45°N (the core of the NPM mode) confirms that there isn’t as much warmth at depth as there was in the warm episodes of previous years.  For example, compare the recent subsurface conditions with those of June 2014, when the original Blob was in full swing – see below.

Based on this analysis, it seems that the current northeastern Pacific warm anomaly is really only evident in the surface layer, and therefore despite a robust surface presentation, we might say that the Blob is a mere shadow of its former self.  If correct, this suggests that it wouldn’t take much to wipe out the warm anomaly if the weather patterns shift over the northeastern Pacific in the coming months; but on the other hand, if relatively high pressure and light winds prevail this winter (as they did in winter 2013-2014), then the warm anomaly could deepen significantly and become more firmly established next year.  Time will tell if this second round of the Blob anomaly will prove to be as significant as the first.