Last week a paper by Yu-Chiao Liang and co-authors was published in the Journal of Climate discussing the connection between North Pacific “blob” warming and atmospheric flow patterns spanning the North American continent from the North Pacific to the North Atlantic.  Among other interesting results, the authors showed that variations in sea surface temperatures in the “blob” region of the northeastern Pacific are rather closely tied to a pattern that has been recognized previously as one of the fundamental modes of atmospheric variability in the Northern Hemisphere.  It appears that Liang et al are the first to make this connection.

The atmospheric pattern that the new paper recognizes as being linked to the Blob is called the “Tropical/Northern Hemisphere” (TNH) pattern.  The positive phase of the pattern consists mainly of a high-pressure ridge over the northeastern Pacific and a low-pressure trough over eastern Canada, and the negative phase is the opposite.  The map below shows the set-up, with the shaded values indicating the 500mb height anomaly associated with a TNH index value of +1 standard deviation.

Here’s a link at NOAA’s Climate Prediction Center describing the TNH pattern; note that the pattern was first classified in 1986.

The index representing the TNH pattern (the “TNH index”) was easily the most positive on record (1948-present) in the winter of 2013-2014, which was when the recent Pacific warm blob pattern was most pronounced.  Here’s a map of November-March 500mb height anomalies in that winter, showing that the pattern was fairly closely aligned with the positive TNH pattern.

It’s worth stating again that the TNH pattern was not originally classified in reference to North Pacific ocean patterns; instead, it was derived from a study of patterns of variability in the atmosphere alone.  But Liang et al have now shown us that this mode is related to the blob pattern in Pacific surface temperatures – and so this suggests that the North Pacific blob is also a fundamental pattern of climate variation, not just a random feature that happens to have emerged in recent years.

There are other interesting aspects of the new paper that I won’t discuss here, but one issue I do want to address is whether the TNH results are sensitive to the definition of the blob pattern.  Liang et al followed Bond et al (2015) in using a simple area-average of sea surface temperature anomalies over a fairly small region of the northeast Pacific to compute the “blob index” (the region is approximately west of Washington and Oregon, and south of the Alaska/Canada border).  In contrast, I’ve used the North Pacific Mode, as proposed by Hartmann (2015), to represent the blob pattern in previous posts on this blog (e.g. here).

Here’s a pair of maps showing the two alternative approaches to classifying the blob pattern; the “blob index” (top map) is more closely tied to the specific blob region, whereas the NPM pattern reflects broader variability across the North Pacific.  The blob index and the NPM index are correlated at only R=+0.70 for 1948-2015, so the patterns are far from equivalent. 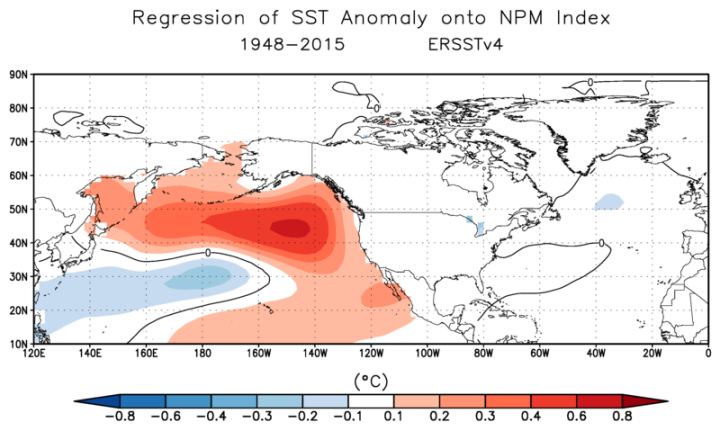 The NPM pattern has been more appealing to me in the past, because it shows up prominently and naturally in historical analysis of temperature variations in the entire tropical and northern Pacific Ocean, whereas the blob index is defined specifically in reference to the recent observed warm anomaly and the rectangular boundaries of the box average are chosen accordingly.  Another reason to prefer the NPM is that it’s uncorrelated with the Pacific Decadal Oscillation (PDO), but the same is not true for the blob index (there is a weak positive correlation).  However, it turns out that the NPM pattern is not as closely tied to the atmospheric TNH pattern as the blob index.  The chart below shows lagged correlations between the TNH index and both the NPM index (blue) and the blob index (red). 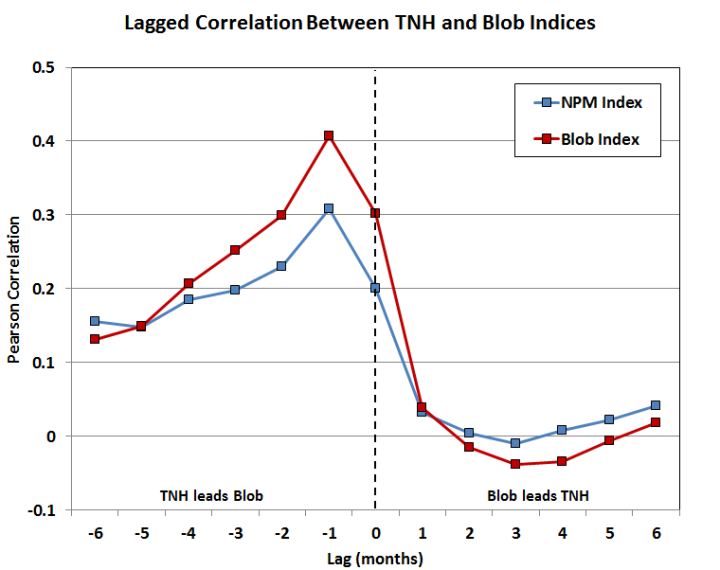 As noted by Liang et al, the maximum correlation occurs when the TNH index leads the blob index by one month, which indicates that the atmospheric pattern tends to drive the ocean temperature pattern rather than the other way around.  However, the correlation is weaker for the NPM index, and from a forecasting perspective this indicates that the TNH would be less useful for predicting the NPM index than the blob index.  The maps below confirm a slightly more tenuous connection between atmospheric height anomalies and the broad NPM pattern as compared to the focused blob index. 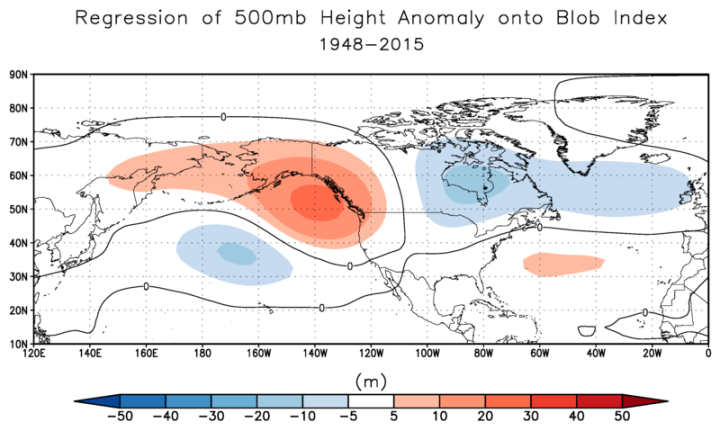 To sum up: the new paper by Liang et al has uncovered a nice connection between the North Pacific blob and a previously identified pattern of atmospheric variability.  Owing to the fact that the atmosphere forces the ocean in this part of the world, the TNH pattern provides a certain degree of predictability of the blob pattern; the mechanisms of this process are discussed in the paper.  In view of the new results, it will be worth watching the TNH pattern closely in future and also keeping track of the narrowly-defined “blob index” as well as the NPM pattern.  An interesting topic for future work might be to explore which of the ocean index definitions (NPM or blob index) is more relevant to large-scale climate impacts in Alaska and beyond.