Those who follow North Pacific temperature patterns closely are well aware that the past summer brought a dramatic expansion of above-normal temperatures at the ocean surface across the northern North Pacific Ocean, reversing the cold anomalies that developed last winter during the strong El Niño episode. The two maps below illustrate the change, based on OIv2 SST data. The late winter pattern was very characteristic of the positive PDO phase, but by late summer the PDO index dropped to near-neutral and the pattern more closely resembled the positive NPM (North Pacific Mode) phase, i.e. “the blob” pattern. 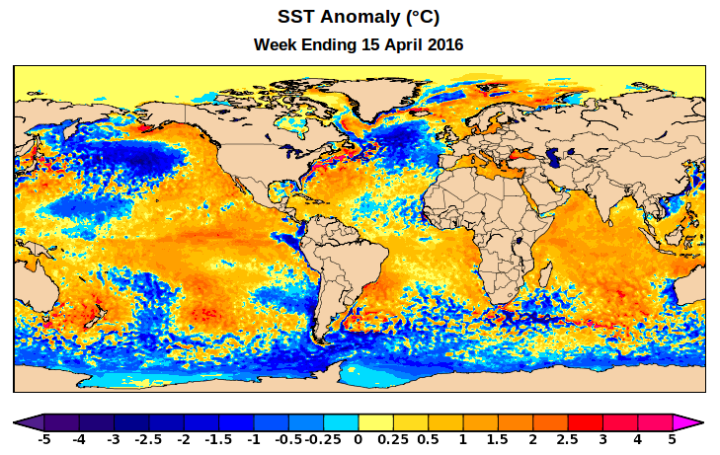 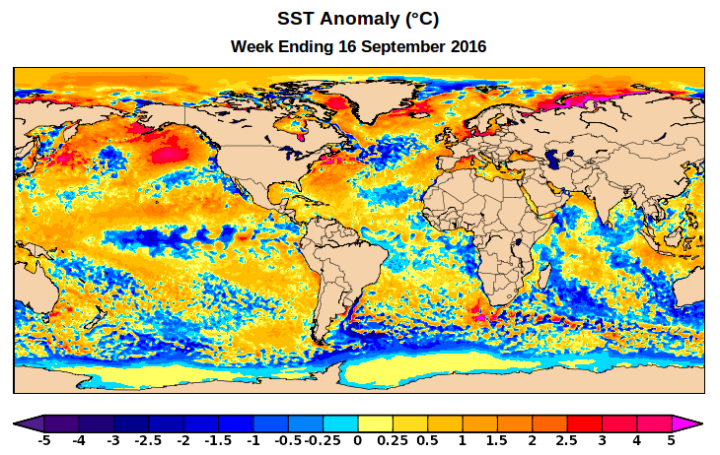 Here’s a chart showing the monthly NPM index since 2010, based on ERSSTv4 data. Remarkably, the negative NPM episode of late winter, related to El Niño, proved to be very short-lived, and the index is already back up to the strongly positive territory of 2013-2015. 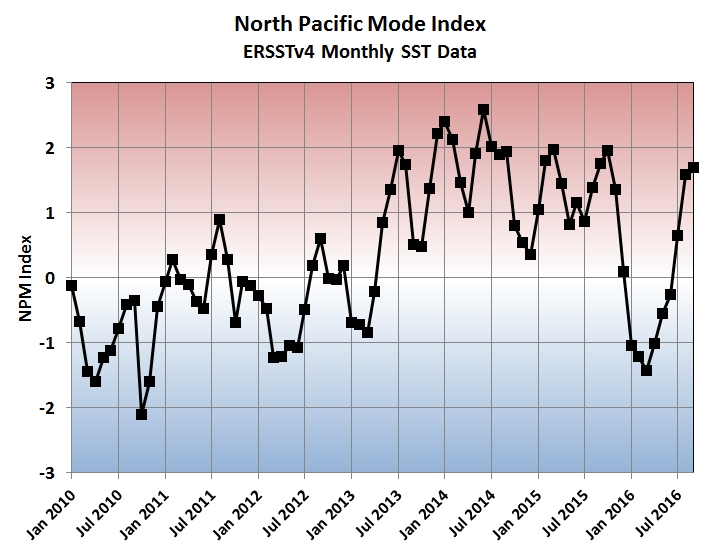 The map below shows the average sea-level pressure anomaly from May to September this year across the North Pacific, and this provides an explanation for the strong warming of ocean surface temperatures: persistent high pressure brought plentiful sunshine and light winds to the “blob” region south of Alaska and west of Oregon and Washington. 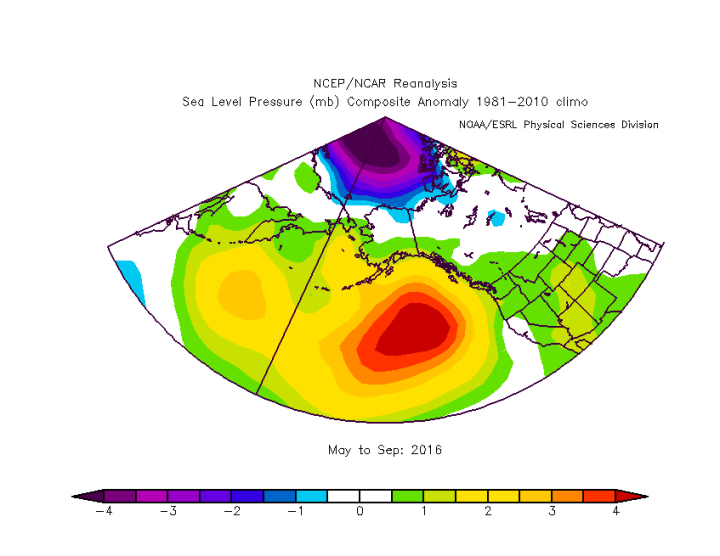 The rapid resurgence of the blob pattern in the past few months may also be linked to the fact that the subsurface warmth in the northeastern Pacific never went away last winter; instead, the extremely positive PDO phase helped maintain unusual warmth through a deep layer in a broad zone along the west coast of North America. In theory the PDO and NPM modes are independent of each other, but in practice the positive PDO phase may have helped maintain the subsurface conditions that then encouraged the re-emergence of the blob pattern. This is illustrated by the maps below, showing the evolution of the average temperature anomaly (departure from normal) in the top 200m of the ocean. East of about 140°W, the water remained unusually warm even as the NPM index became significantly negative in late winter. 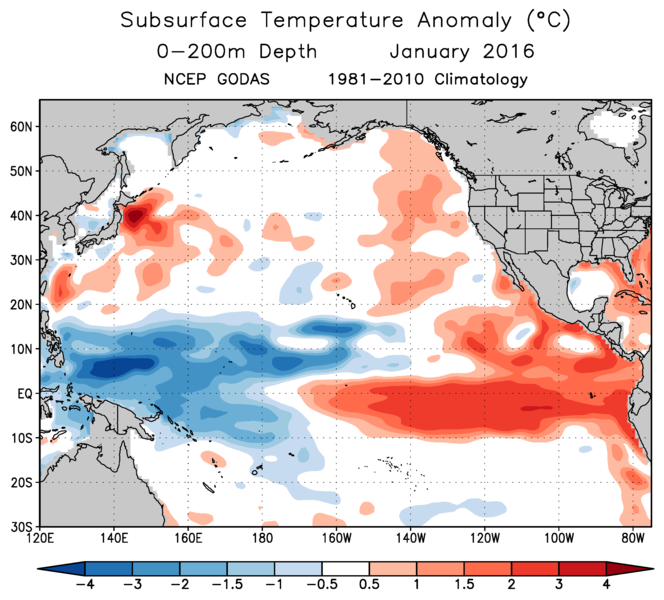 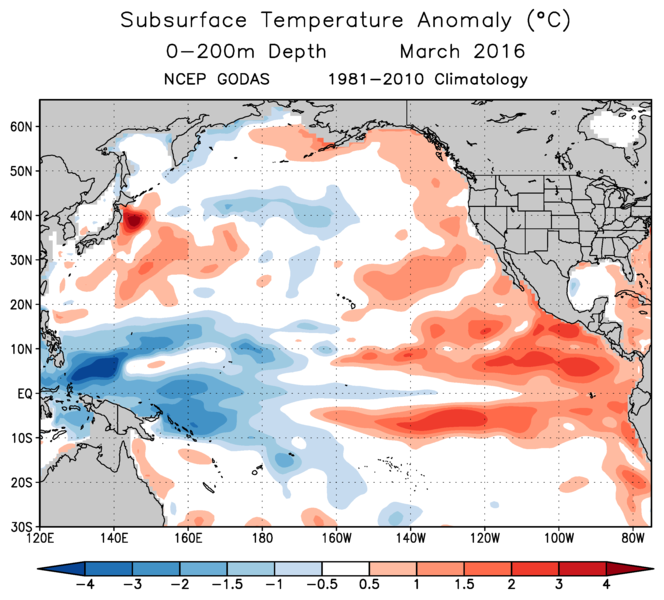 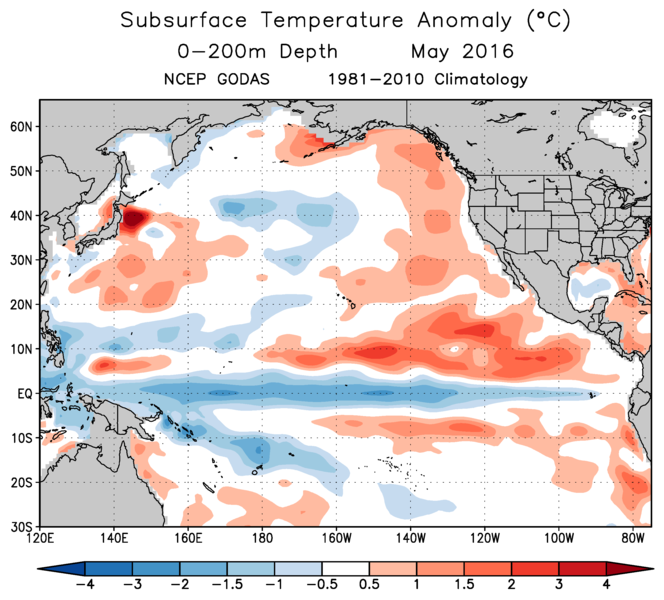 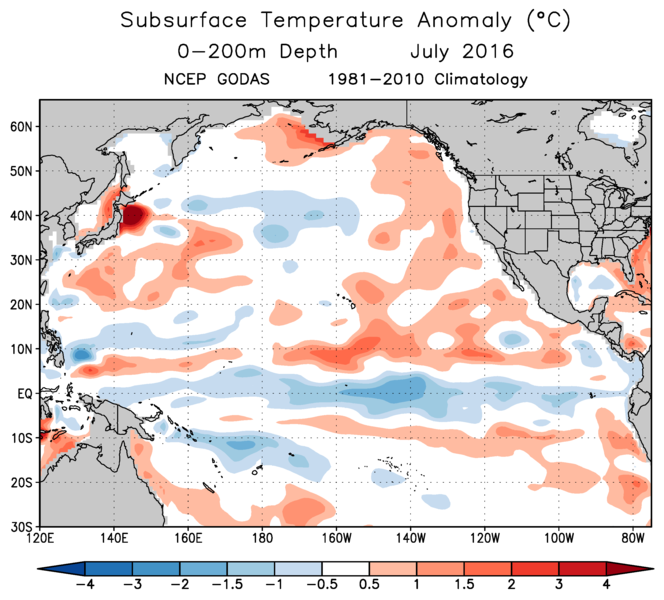 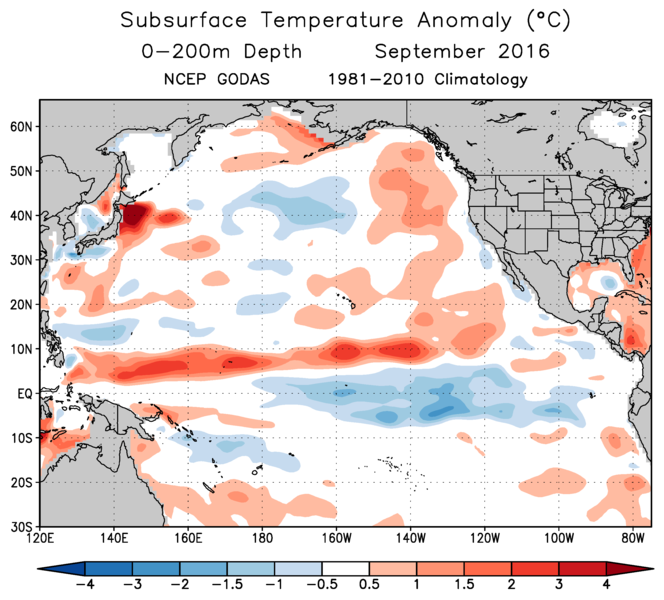 A cross-sectional view of the changes since January (see figures below) confirms the persistence of anomalous warmth in the northeastern Pacific. The last cross-section in the sequence, showing the September analysis, reveals the connection between subsurface conditions and the recent surface warmth near 150°W (the blob center), and it also shows that the subsurface cool anomaly in the central North Pacific has become quite deep and pronounced. The location of the cool conditions is consistent with the positive PDO phase, and the intensification of the west-east gradient suggests that the positive PDO pattern has become quite entrenched in the subsurface waters. Consequently it’s no surprise to see that the long-range computer models expect the PDO to become positive again this winter (see the bottom figure below); and this would bring a high likelihood of unusual warmth once again to Alaska and western Canada. 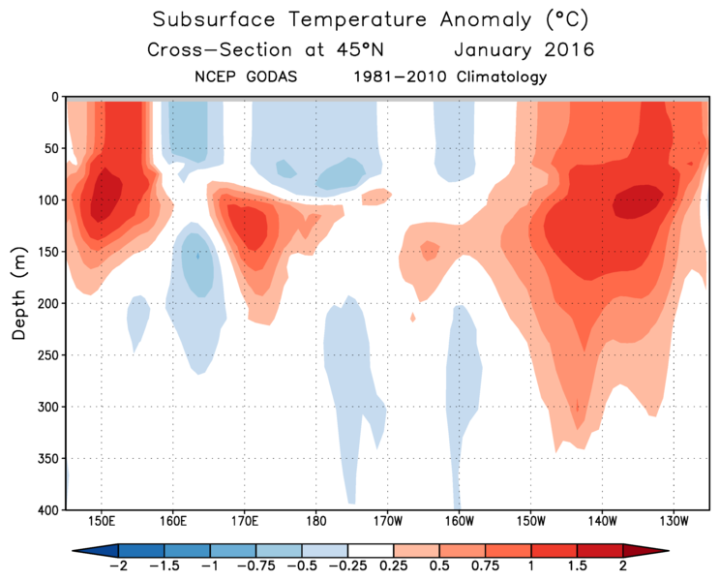 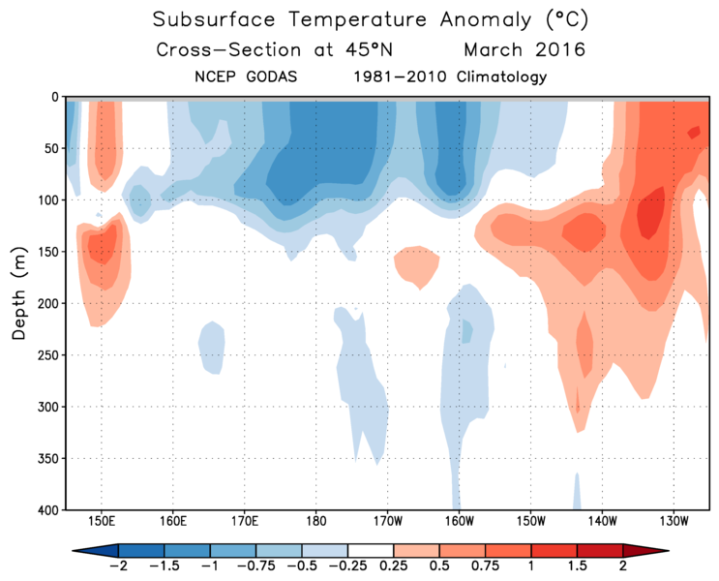 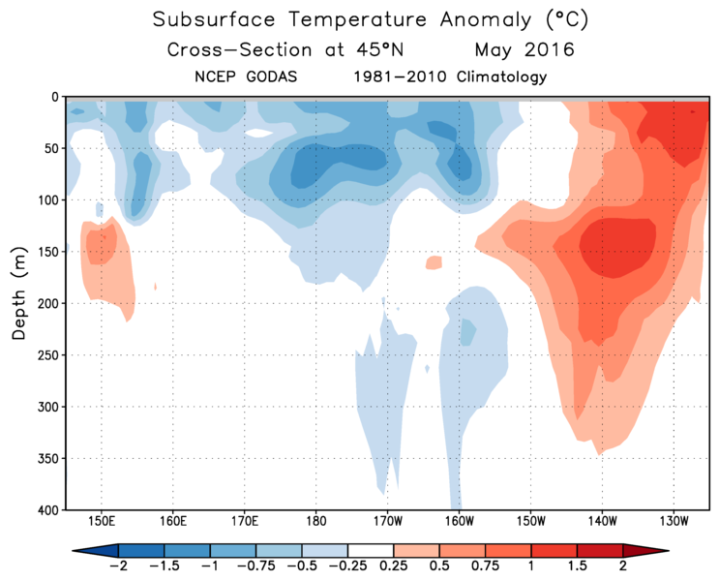 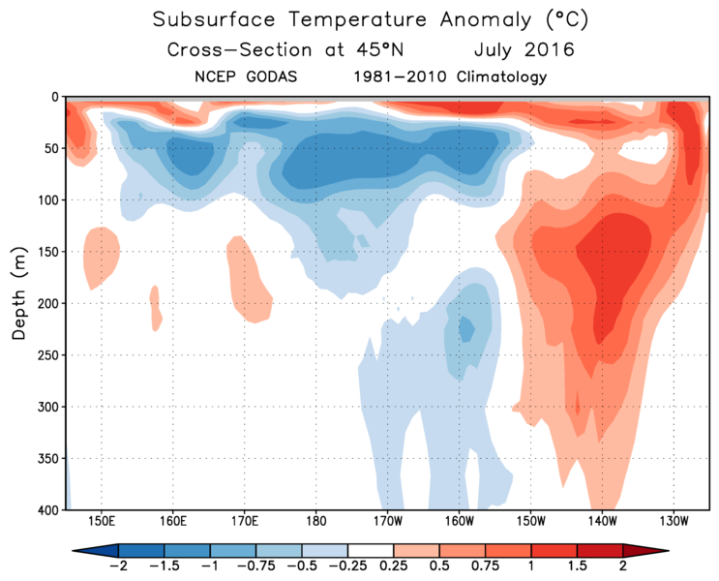 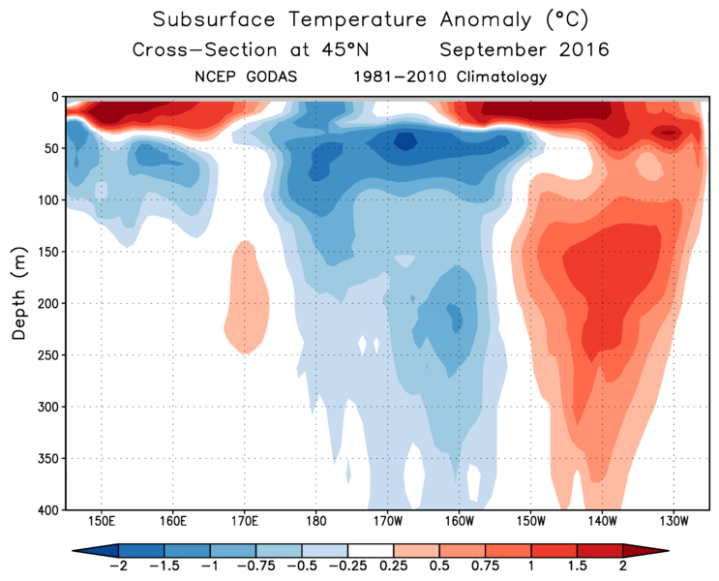 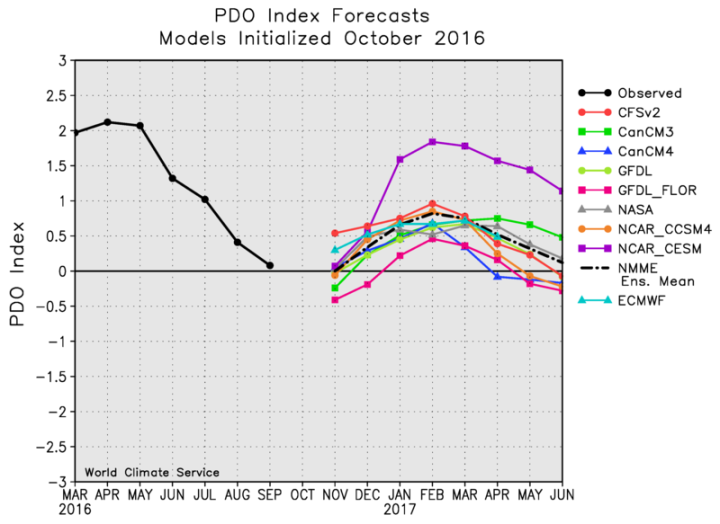 One thought on “Subsurface Conditions”