In my post last month I mentioned that the recent reversal of the North Pacific Mode (NPM) phase was related to this winter’s El Niño event.  In other words, when we saw El Niño developing last year, we might have anticipated that “the Blob” would probably lose some of its surface signature over the course of the winter; it wasn’t a surprise.  The chart below illustrates that this is a typical course of events by showing the evolution of the NPM index in 8 previous winters with the strongest El Niño conditions since 1950 (based on the bivariate ENSO index from November through March). 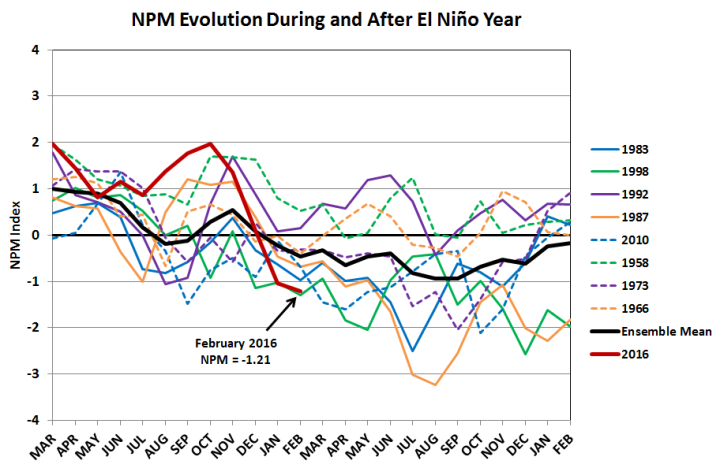 The thick black line in the chart shows the mean of the 8 similar past years, and we can see that it’s normal for the NPM index to decline quite significantly from the spring prior to an El Niño winter to the summer after an El Niño winter.  This winter the NPM phase reversal was unusually rapid and dramatic, but the sign of the change was a typical response to El Niño.  The reason for the change is that El Niño reliably induces low pressure in winter across the North Pacific Ocean, and the associated stormy conditions cause surface cooling that translates into a shift away from the positive NPM phase.

It’s interesting to see from the chart above that the negative NPM phase often lasts throughout the year following an El Niño winter, and this suggests that the positive NPM phase may be unlikely to reappear for some time.  A second chart below shows more evidence that a quick flip back to the positive phase may be unlikely.  Here I have found the best historical matches (1950-present) to the NPM index evolution over the last 12 months, and the chart shows the evolution of the “analogs” for the next year.  None of the analog years is a perfect match to what has happened lately, but the idea is that if we take a group of broadly similar years and average them out, we can get a sense for what is most likely to happen.  Note that 3 of the 7 years were also included in the El Niño chart above, but 4 of the 7 years are different. 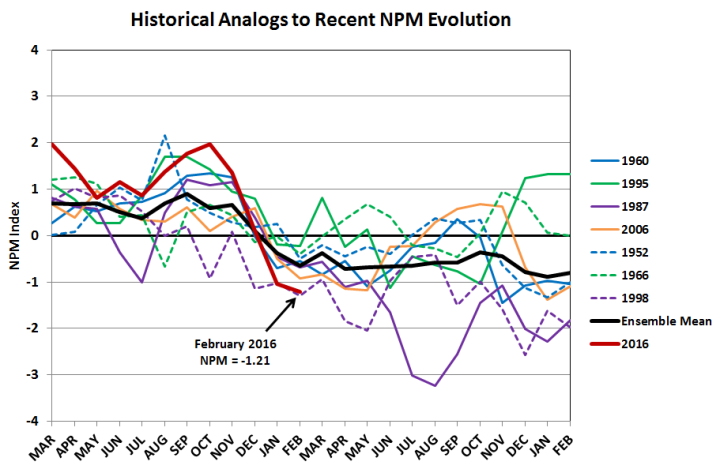 The analog analysis shows much the same thing as the El Niño chart: the NPM appears unlikely to revert to a positive phase, and it is even more unlikely to become strongly positive again in the next 6-9 months.  Even after an interval of 12 months, the consensus of the analogs suggests that the NPM will probably remain negative, and perhaps substantially so.

In conclusion, historical patterns of NPM behavior suggest that the positive phase (“the Blob”) is rather unlikely to return in the near future, and we may well see a negative NPM last into 2017.  I would make one cautionary note, however; there is still a deep pool of unusually warm water in the northeast Pacific, and I wouldn’t rule out the possibility that this could favor a quicker return to a positive NPM than we would otherwise expect.  Further analysis may reveal whether the subsurface conditions have any bearing on what comes next; but for now, at least, the Blob is in hibernation.

For those who may be interested, here’s a map of the February mean SST anomaly.  The warmth along the west coast of North America represents a significantly positive PDO phase, which is independent of the NPM phase. 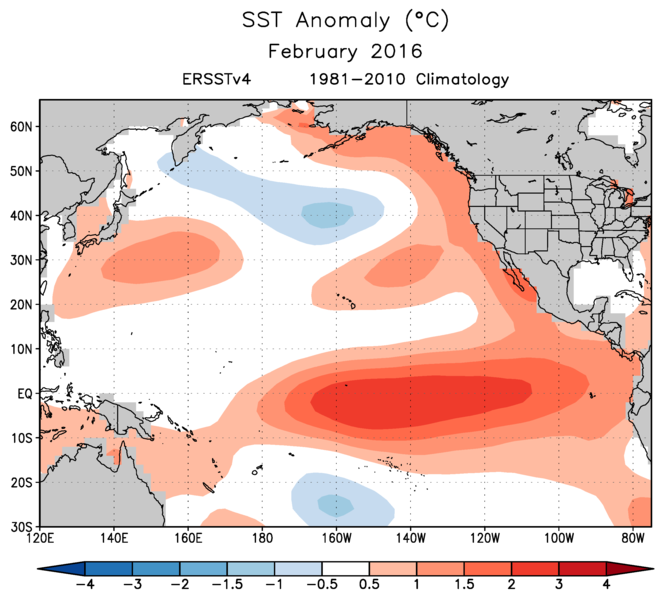